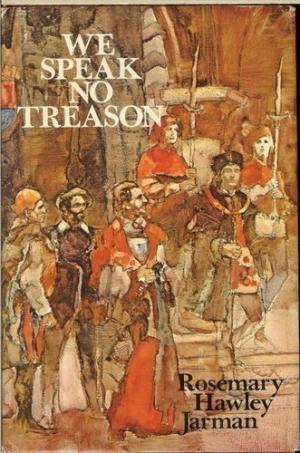 Rosemary Hawley Jarman’s We Speak No Treason is a romantic novel based on the life of Richard III and his relationship with the original Nut-Brown Maiden, the girl who becomes the mother of his illegitimate daughter, Katherine Plantagenet. I read it long ago, and now I have come across it again, republished as two books: The Flowering Of The Rose, and its sequel White Rose Turned To Blood.

Like Anya Seton’s John of Gaunt, the Richard of Gloucester we meet here is a man of honour. Like John, he is afflicted with an exaggerated sense of loyalty that makes it imposssible for him to seize the throne and order the murder of his dead brother’s child(ren).

In The Flowering Of The Rose, we see him first through through the eyes of our heroine who, though the daughter of a knight, is, at twelve, a skivvy at the beck and call of both the nurse and the cook in the household of Lady Elizabeth Grey. [The nurse’s] wrinkled eye was upon me and I searched my mind for a task left undone, a duty neglected. I had been beaten once already that day; thus was I standing to watch Dick and Thomas Grey from the window. I could not sit down easily. But a beautiful skivvy, for on May Day in the local village, all men gaze at her, the King’s jester, Patch, just passing through (his master visiting her mistress) falls in love with her, and a wandering minstrel dedicates the ballad he has been working on for months to her: The Nut-Brown Maid. It becomes famous.

She is a Cinderella figure. Her mistress marries King Edward (there is witchcraft involved) and four years later, when she is sixteen, the Maid follows her to London where she meets the King’s young brother, Richard of Gloucester.

I heard Patch’s light step behind me in the passage, and without taking my joyful gaze from the scene below, stretched out my hand, crying:

‘Ah, my friend, remember you this day! When all men called me fair, and the old ballad-maker said I would be a true maid, and fashioned this song for me ere he died! Take my hand and say you have not forgotten!’

And I felt his hand in mine, and we stood together listening to the music until it ended, and I turned with shining face to give him one kiss out of my true pleasure, for after all he was my friend and had shared this moment with me. And the hand which held mine did not belong to a fool, but to the King’s youngest brother, who stood looking down at me with, God be praised, the same look I had seen in the eyes of men that May Day long ago.

For a long time their love affair consumes them both, then they are separated by events of state. And she later bears him a daughter of whom he knows nothing.

In Part Two, the Jester (“Piers, the man, Patch, the fool) continues the story. He has, he tells us, “loved two women in my life”. These two are our Nut-Brown Maiden and Lady Anne Neville, daughter of Warwick the King-maker and, when her father is killed, heir to enormous wealth and lands. Richard wants to marry her, but his brother George of Clarence is against this as the marriage will make Richard much too powerful. Then the girl disappears.

Richard searches for her, apparently heart-broken, but Patch believes him to be interested only in her money, and when by chance he comes across her he does not at first inform Richard.

Now we have a reversal of the Cinderella story, for Anne, the princess, is concealed as a kitchen-maid among folk who have no idea who she is. And Richard, who truly loves her – she was his childhood sweetheart – is still desperately searching for her (the Nut-Brown Maid apparently quite forgotten!)

Eventually, of course, Patch tells him, the girl is saved, they marry, and Richard and Anne live in the north – with Patch, who becomes Richard’s jester. They have a son, Richard’s heir.

And that is the end of this book (i.e. the first two Parts of We Speak No Treason).

You will want to read on, that is for sure.

And here is a glimpse Rosemary gives us in advance of Henry Tudor, the bad guy of the next book, the contender for the throne whom no one took seriously until it was too late. After all, he had no claim to the throne whatsoever …

His Majesty keeps mastiffs. They lie outside his chamber of a night. Soon after his coronation we had a big baiting at Smithfield: in its way an innovation because instead of a bull, he commanded that a lion should be tried against three of his dogs. When the great tawny beast lay dead, and the curs, all gaping gory wounds, stood panting froth, King Henry ordered a strange conclusion to the sport.

‘Hang them,’ he said in his high Welsh voice. ‘Traitorous dogs shall not rise against a king.’ It took long moments for the big animals to choke on the end of a felon’s halter. 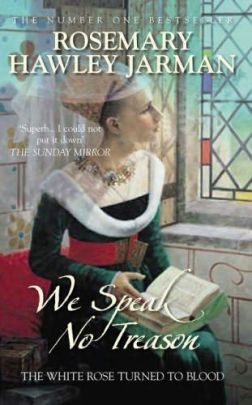 Like the first book, White Rose Turned to Blood is divided into two parts (Parts 3 and 4 in the original one-volume novel). The narrator in the first is the Man of Keen Sight, a landless knight and one of Richard’s company, whom we have already met, and in the second we are back with the Nut-Brown Maiden, the twelve-year old we started with at the beginning of the first book, now Richard’s ex-mistress and mother of his bastard daughter, living in a nunnery.

When this volume opens, Richard is dead, and the narrator and his companions are in a cell awaiting execution for “treason” – ie fighting on behalf of the King against the usurper Henry.

I am thirty-three years old, and I have served three reigns and seen the separate and singular manner of their ending. A fourth reign I shall not see, nor would I wish it. There is no King, save the King of Heaven, other than the third Richard. […] I will close my ears to the hammerings that build my doom and, in love, remember Richard. Then he was Duke of Gloucester, and seventeen. Now he is but ‘the traitor Plantagenet’ and he is dead.

I shall think on the day when, for the first time, he asked: ‘Will you ride with me?’

And so we go back to 1469, when the young knight first met Richard and entered his service, and we follow Richard’s career through again from a quite different perspective.

I love this. It reminds me of Durrell’s Alexandria Quartet in its four-dimensional approach, the three different spatial views followed by a view from further on in time. And the way she links the different perspectives is masterly: here, for instance, the narrator tells how he met the Nut-Brown Maiden:

It was at Fotheringhay, and I had gone down into the camp, late, with some message. Everything was steaming with damp summer heat and in the musky darkness i discovered him with a young maid whom he bade me guard through the ranks and deliver to the Duchess of Bedford’s apartments.
Kneeling beside him, I remembered more. I had thought it prudent to offer the damsel my arm, as she struggled through the trailing briars. Her hand on mine was like a small smooth flame. She stopped suddenly when we had gone a few steps and turned to look back.
‘Ah Jesu!’ she whispered. ‘How he shines!’
I fixed my sight upon the pale Duke, bringing him near in the lanternlight. A moth flew round his face and he lifted his hand to brush it away. The maiden smiled, in tears.
‘There is a light … a light,’ she sighed.
‘What then, mistress?’
She had looked up at me from the cavern of her hood.
‘A light about him not of this world,’ she said.
I could see nought but the fen-fires, burning malefically.

What can I say? Read those books. They leave 99% of fiction set in the medieval period quite in the shade.