She smelled of gin and Lime
Street station, gestured at passing life
with a hand that flew away on flights
of fancy, crash-landing on mine

when she lifted a glass
and thought her mask still safely in place.
Twenty years beyond just once, I chase
a memory to that last

train in London, not quite
fast enough to catch the me of I
who wave scarred and untouched hands goodbye
to any chance of twice.

This collection of fifty or so poems is actually made up of three smaller collections. The first, “Once Upon a Time Please”, contains only three poems I would want to return to again and again. “Berlin 29/1/33”, “Both Sides”, and this one:

In one room of a damned metropolis
a lonely madman works on a plan.

In an all-night corner coffee bar
a statistic prays for one last fix.

Twelve inches away from the late-night news
a myopic spinster weeps in colour.

Someone somewhere begins a letter
to anyone’s silent son or daughter.

The third collection, “Lines from No Man’s Land”, seems to be about a failed marriage. It is simply a poet whingeing, therapeutic writing, and probably better left unpublished.

However – and I do hope you are still with me, for this is a big however – the second collection, “Love Should Be”, is a series of gems in which the poet sees and feels and notes in perfectly crafted lines what others see but lack the imagination to feel or the will, or the skill, to note. As I say, they are all gems, but I must draw attention to “Do You Need Love?”, and to “Escape”

They found him eventually, of course:
face down in a stinking ditch, hidden by
bracken and gorse and bramble. After more

him existence posthumously. I’m glad
he died outside, pleased he at least clawed back
that week to himself, that one lousy week

in an antiseptic lifetime, defied
those grim samaritans with needles full
of reason, eluded their muscular

compassion, electric understanding.
Yes, they found him in the end, the sick one,
the freak, the mad thief who stole one whole week

and spent it all. I see sane eyes above
neat uniforms beside that rotting ditch,
hear thoughts in trained minds click like rusted locks.

And finally, my own personal favourite from this whole collection, a six-star poem if ever there was one, “Wheat Field With Crows (for Vincent and too many others)” – the Vincent being, of course, Vincent van Gogh. It is perfect. 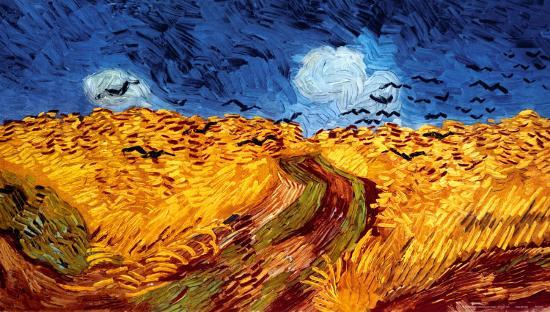 (for Vincent and the too many others)

beneath a blue-black
sick summer

all the slick
laws of probability;

the breath of fate,
the mistral of truth:

clues to the paradox
of a waking dream,

the brushstrokes
of a scream.