The world is full of women
who’d tell me I should be ashamed of myself
if they had the chance. Quit dancing.
Get some self-respect
and a day job.
Right. And minimum wage,
and varicose veins, just standing
in one place for eight hours
behind a glass counter
bundled up to the neck, instead of
naked as a meat sandwich.
Selling gloves, or something.
Instead of what I do sell.
You have to have talent
to peddle a thing so nebulous
and without material form.
Exploited, they’d say. Yes, any way
you cut it, but I’ve a choice
of how, and I’ll take the money.

I do give value.
Like preachers, I sell vision,
like perfume ads, desire
or its facsimile. Like jokes
or war, it’s all in the timing.
I sell men back their worse suspicions:
that everything’s for sale,
and piecemeal. They gaze at me and see
a chain-saw murder just before it happens,
when thigh, ass, inkblot, crevice, tit, and nipple
are still connected.
Such hatred leaps in them,
my beery worshippers! That, or a bleary
hopeless love. Seeing the rows of heads
and upturned eyes, imploring
but ready to snap at my ankles,
I understand floods and earthquakes, and the urge
to step on ants. I keep the beat,
and dance for them because
they can’t. The music smells like foxes,
crisp as heated metal
searing the nostrils
or humid as August, hazy and languorous
as a looted city the day after,
when all the rape’s been done
already, and the killing,
and the survivors wander around
looking for garbage
to eat, and there’s only a bleak exhaustion.
Speaking of which, it’s the smiling
tires me out the most.
This, and the pretence
that I can’t hear them.
And I can’t, because I’m after all
a foreigner to them.
The speech here is all warty gutturals,
obvious as a slab of ham,
but I come from the province of the gods
where meanings are lilting and oblique.
I don’t let on to everyone,
but lean close, and I’ll whisper:
My mother was raped by a holy swan.
You believe that? You can take me out to dinner.
That’s what we tell all the husbands.
There sure are a lot of dangerous birds around.

Not that anyone here
but you would understand.
The rest of them would like to watch me
and feel nothing. Reduce me to components
as in a clock factory or abattoir.
Crush out the mystery.
Wall me up alive
in my own body.
They’d like to see through me,
but nothing is more opaque
than absolute transparency.
Look – my feet don’t hit the marble!
Like breath or a balloon, I’m rising,
I hover six inches in the air
in my blazing swan-egg of light.
You think I’m not a goddess?
Try me.
This is a torch song.
Touch me and you’ll burn. 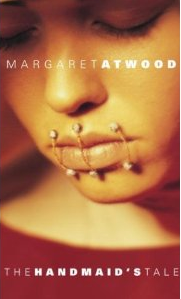 The term “handmaid” in this tale is based upon Sarah’s handmaid Hagar, an Egyptian slave, who bore Abraham a son when Sarah seemed to be “barren”, and of course also Rachel’s handmaid Bilhah, who bore Rachel’s husband Jacob two sons.

Not based metaphorically, but literally. For this book is set in part of a not so futuristic fallen-apart USA, a society that has put into practice all the most bizarre notions of extreme fundamentalist Christianity – which if this book is anything to go by are quite as bizarre as anything fundamentalist Islam or Hinduism can come up with.

Offred is a slave (just as Hagar and Bilhah were, 3000+ years ago) in the house of one of the Commanders of the Republic of Gilead, and her principal function is, once a week, to be inseminated (yes, it is that clinical) by the Commander. She lies on her back between the open legs of the Commander’s barren wife (always “barren” – “There is no such thing as a sterile man any more, not officially. There are only women who are fruitful and women who are barren, that’s the law.”) so that it seems it really is his wife who conceives, if anyone does. And if a baby comes of it, it will be the wife’s baby. Surrogate motherhood carried to, I suppose logical, extremes.

The only means of escape she has is in her own bare little room on her own bare little bed, where she can “step sideways out of my own time” (she has no books, is not allowed to read or write) and remember and dream of another time, the time before all this began. “Though this is time, nor am I out of it.”

Because they all remember the time before, though no one dares mention it. Except one friend of hers, Moira, when they were in training to be handmaids. An old friend – they had been at university together – who subsequently attempted to escape to Canada and sanity.

The punishment for all such “sins” is death by hanging from the Wall. Such sins as doubt and disbelief, and “Gender Treachery” – guess what that is.

A brilliant novel full of unforgettable moments and images. How about this. Remember, Offred is a university educated woman living in a world where women (all women) are inferior beings whose only function is to wait on men and bear children.

I would like to believe this is a story I’m telling. I need to believe it. I must believe it. Those who can believe such stories are only stories have a better chance.

If it’s a story I’m telling, then I have control over the ending. Then there will be an ending, to the story, and real life will come after it. I can pick up where I left off.

It isn’t a story I’m telling.

It’s also a story I’m telling in my head, as I go along.

Tell, rather than write, because I have nothing to write with and writing is in any case forbidden. But if it’s a story, even in my head, I must be telling it to someone. You don’t tell a story only to yourself. There’s always someone else.

Even when there is no one.

At this point the writer, Margaret Atwood, imagines her own personal Hell. I am there with her.

Click here for a fascinating article on the book by Margaret Atwood herself. 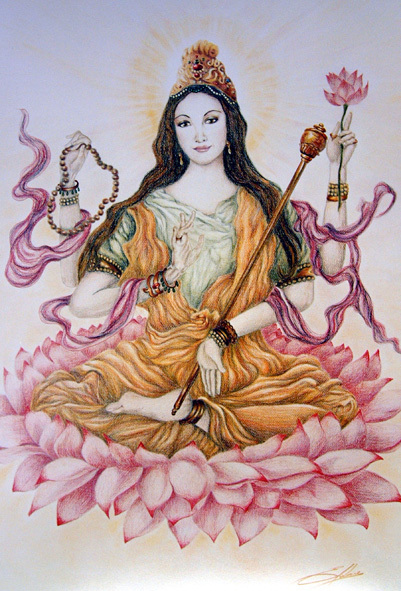