A swirl of blossoms caught in the water’s current begins the season.

I chase one red leaf across dry and brittle grass. Juice of summer gone.

Surrounded by gentle nature, a man rests in contentment but keeps his sword nearby. A heart does not convey the warning of a mouth.

Winter is the perfect channel

To carry Via Negativa,

We sit in contemplation,

empty as an eggshell.

This time is colored by little outside;

A flash of darting cardinal

racing past our eyes,

The sound of a falling limb

our eyes searching the skies,

The moaning of the wind

And the rattle of skeleton- bones

Of the attic haunts.

To those who succumb to frigid winds,

And those lost from shelter.

We spiral into the Darkness,

Where we barely draw breath,

And stare outside at

We draw closer to low fires,

And, with time and patience–

A short story written by a poet who is also a loyal follower of this site. Read and enjoy – but heed her warning before you start. 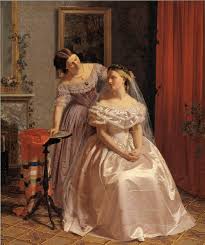 I am putting together a collection of short stories for publication next year.  This is one of them.  I had wanted to post this around Halloween, but missed the date.  Don’t read if you are perturbed by vampires or lesbianism.

Many years ago there was an elderly gentleman who lived  with his invalid daughter Marie, in the Vercors region of France, near the Swiss Alps. Comte d’Epinay was impoverished, due to the death of so many relatives by Madame Guillotine, and the taxation upon those of the aristocracy who managed to keep their heads.

For a while, Comte d’Epinay was addressed as “Citizen d’Epinay”, but the country folk reverted to M d’Epinay, and an uneasy peace existed.  M d’Epinay lived without the luxuries of his youth in a decaying house, too small to be considered a chateau and too large for economy.  The roofs leaked, the fireplaces…

Can a woman practise more than one art? asks Jane Kohut-Bartels, and answers it perfectly in her blog – Lady Nyo’s Weblog:

I received a comment recently on my blog about this issue. Apparently this was a rather new concept for this man. I in no way think he was trying to belittle me, but raising this question really made me think. Once Again. I thought I had put this on the back burner, but I see it […]

via Can a Woman Paint and Be a Writer? And do it with the same hand? — Lady Nyo’s Weblog

All The Old Men Are Gone

All the old men with beautiful manners are gone.

They with courtly manners

who brush their lips over your hand

who look up the white pillar of arm

The Hungarians, Italians and Russians

who murmur into faces

and translate with twinkling spheres,

a desire found ‘deep in their hearts’

Casanova, who glides across

the room and anchors your vanity to his side.

They are all gone, dissolved in the waters of time.

You were glad for the flirtation,

it made the stomach flip,

If even for the evening

or a few hours until dawn

you were young and desirable once more.

the light came forth from dull shadows

the room was a crystal ball spinning

Indian Men and Authorities Are Hiding Their Heads in the Sand…..Hoping the World Will Forget What They Condone.

I wrote this short article “On the Misogyny of Indian Men” in July, 2014.  It doesn’t begin to cover the topic of the entrenched violence of Indian Men towards women and children.  It was then a stab at the very outrageous behavior that is seen as ‘normal’ by many in India.  Has much changed?  In the estimation of many, No. (The demonstrations of thousands are a start, but this is a country of over one billion people).  When you have lawmakers making statements that support the disgusting misogyny and murder by the bus driver (Mukesh Singh) of a 23 year old medical student, you can only throw up your hands at the hopelessness of the situation in India.

But this raises a question:  Is Mukesh Singh a monster, along with…

A little book of erotica that came my way, left behind by a visitor actually, and though I try to return books lent to me I don’t feel I need to return this little gem to him. In fact he may have left it on my bedside table intentionally: there are things in here that every woman should ponder, and, if the cap fits (so to speak) take to heart;  and things that any man with imagination will thrill to.

It is a book of “very short stories” and “very short poems”, miniature masterpieces, many of them set in the world of the professionally beautiful and submissive geisha, a work of art in herself, there only to give pleasure.

Not a world we know, most of us, here in the West, though I have had some experience (some experiences) of it – that world, the East – on my travels and during my stays in India and Burma (yes, I know, Myanmar) and Thailand. But I have never been to China or Japan, and now perhaps never will. Being one for Tibet and for freedom I have no wish to visit imperialist China, and the Japanese men I have known have put me right off working there.

However, if anyone could make me change my mind, it would be Jane. I love nearly everything in this book.

Among my favourites are the 200-odd-word story Bad Karma.

“Who is coming?” she said as Midori painted her eyebrows high on her forehead.
“So sorry, but it’s Tanaka-san today.”
Bao’s eyes widened. “Aiiieee! He likes things pushed in odd places!”
“Just do as he wants. We’ll have rice balls later.”
Tanaka-san’s karma was to be short-shafted and have peculiar desires. Bao mourned her own karma.

And Ali Baba And His Four Thieves, where we get something different: belly-dancing. Jane is a belly-dancer (another thing we share) and the belly-dancer here is a silly western girl who is asking for it, and gets it. I found that of all the girls in the book, I couldn’t help identifying most fully with her! (Very embarrassing, but I’m being honest.)

Then there is the Shibari series of thirteen exquisite miniatures. “Shibari”? Synonymous with “Kinbaku-bi”, which apparently means ‘the beauty of tight binding’. (Was this why he left it by my bed?)

And the Haiku. Listen to this:

The glance at a wrist
White, the pulse of a river
Tiny beat of life

The morning wren sings,
I stand in the moonlit dawn
kimono wrapped tight.
Last night I made my peace
now free from all attachments.

The collection finishes with three slightly longer stories, two, both unforgettable, set in France, and the third – my favourite, because so original, so surprising – set in Venice. It is called La Vendetta and tells of the spoilt Signora Maria de Guiseppa Agnesi Faini; her husband, Signor Faini; her lover, Alfredo, “an officer, a dashing lieutenant, now on maneuvers somewhere across the Alps”; and her “friend” – Signor Alessandro Balsamo was her friend. Actually he was her cisebo, tolerated by her husband because Signor Balsamo was a castrato. He had been cut when only a young boy (“Viva il coltello!” [Long live the knife!] the audience yelled when he appeared on the stage) and sang until his voice disappeared.

But now the castrato is growing old and can be treated with contempt. … Or can he?

To be dipped into, then, rather than read straight through. You’ll love it too, I’m sure.